The Izba, the Shtibl and the Global Village 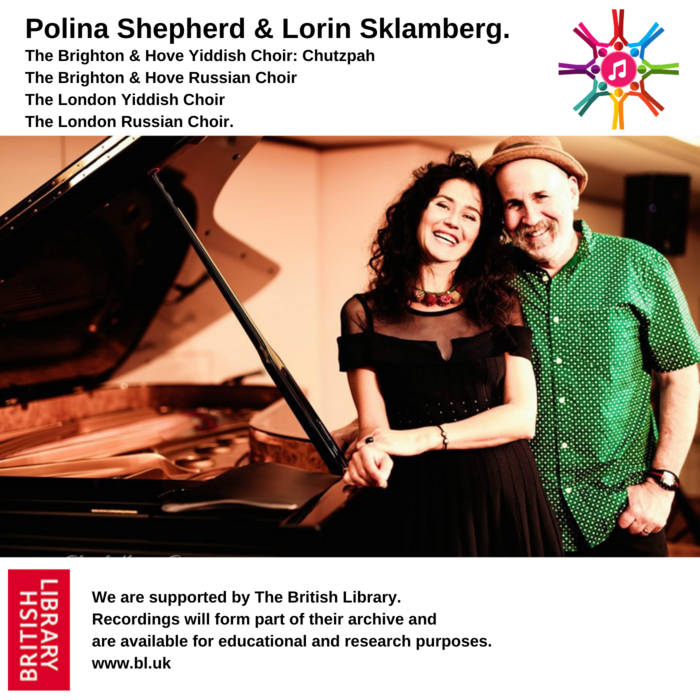 The Izba, the Shtibl and the Global Village

A unique project of Russian & Yiddish songs with the lead singer of the Grammy winning Klezmatics and a Siberian-born British singer and her four UK based choirs. Together they explore the connection between the Steppes and the Shtetl through folk and art songs in Yiddish and newly composed originals.

The Russian and Yiddish Choirs are communities open to all. You do not have to be fluent in these languages to join. In each of these choirs, a true feeling of community is combined with dedication to the cultural, spiritual and folk roots of its singing tradition. The repertoire ranges from popular song, festival music,“nigunim” (wordless Jewish traditional melodies), great classical works bycomposers such as Tchaikovsky and Rachmaninov and contemporary songs.

Choir members are encouraged to free their voices, harmonise with others, and improvise when the music calls for it. Singers grow in confidence as they learnto sing by ear and memorise their parts. The choirs perform regularly and take part in festivals throughout the year. They frequently combine forces to sing at larger events and for recording sessions.

Polina is one of the first generation of musicians of the Yiddish revival scene in the former Soviet Union. Whilst living in Tatarstan, Russia and studying at the State Academy, Polina joined Russia′s first klezmer band after Perestroika, Simcha and toured in dark Soviet theatres in 1990-2000. Growing up in Kazan placed her close to Islamic ornamentation and timbre which can be heard in her unique vocal style. Now living in Britain, Polina continues to tour internationally as a Yiddish and Russian singer. Her compositions including music for theatre shows, large scale choir compositions performed by soloists and choirs all over the world.

Lead singer of the Grammy winning Klezmatics, a leading exponent of Yiddish song and traditional Jewish vocal techniques.
The legendary music critic Robert Christgau has described Lorin Sklamberg’s voice as “transcendent, ethereal and sensual,” … Since he co-founded the legendary klezmer group in 1986, Lorin Sklamberg has been on the receiving end of countless tributes of that nature—his crystalline, expressive vocalizing never fails to have an emotional impact on all within its range.
He has also worked for the YIVO Institute for Jewish Research for almost 30 years, currently as its Sound Archivist. Lorin can be heard on some 50 CDs, and also composes and performs for film, dance, stage and produces recordings.

Thanks to all the musicians involved for a really enjoyable recording
day, and also big thanks to Julian Tardo at Church Road Studios for his help and expertise in making this recording
www.churchroad.net.

Welcome to our page. Music on this page is an archive of recordings of music made by people who have come to the UK from elsewhere in the World. Please note we are not a record label and do not promote individual acts. Some music is for sale, for specific fundraisers, all money goes directly to the related cause. Otherwise, after covering monthly running costs, profits go directly to the artists. ... more

Bandcamp Daily  your guide to the world of Bandcamp

Featuring Oakland sounds from the Smart Bomb collective and Samplelov.